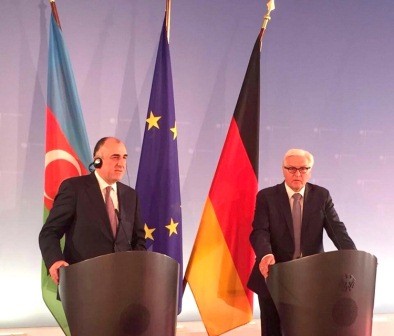 Azerbaijani Minister of Foreign Affairs Elmar Mammadyarov has met with German Federal Foreign Minister Frank-Walter Steinmeier as part of his visit to Berlin.

The two ministers issued a joint statement for journalists before the meeting.

During the meeting, the two exchanged views on Azerbaijan-Germany relations, cooperation prospects, as well as Armenia-Azerbaijan conflict, international and regional issues.

Azerbaijani FM said the OSCE should be more active in the settlement of the conflict, and expressed his hope that Germany would contribute to the process during its chairmanship of the OSCE.

They also hailed political dialogue and economic cooperation between the two countries.