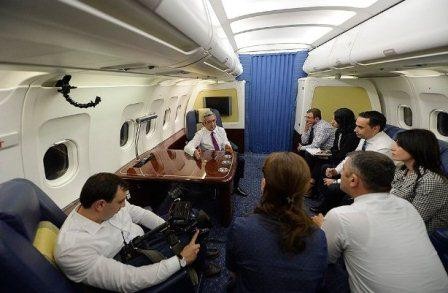 Armenian President Serzh Sargsyan said he is pleased with the results of Monday’s talks with Azerbaijani President Ilham Aliyev in Vienna.

He said the aforementioned on the plane while returning from the Vienna talks attended by the FMs and co-chairs of the OSCE Minsk Group countries, RIA Novosti reported.


Sargsyan said that the main goal of the talks was to clarify the standstill in the negotiation, that there is no option but to fight, and the possibility of solving the problem with fewer losses.

“All in all, I and my counterparts are satisfied with the results of the talks. During the talks, the Azerbaijani president assured that he did not intend to reach a solution to any problem by military force. Let's see how the events will develop. Our desire is that this result be achieved in a peaceful way," said the Armenian president.