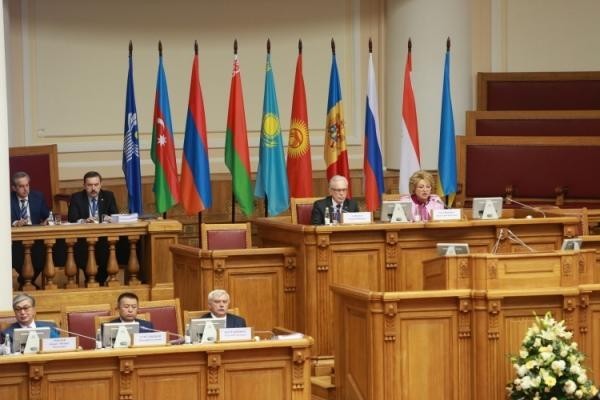 The 44th plenary meeting of the CIS Interparliamentary Assembly was held in Saint Petersburg, Russia on Friday.


For the first time, the session was joined by delegations from the world’s major interparliamentary assemblies, among them delegations led by PACE President Pedro Agramunt, OSCE PA President Ilkka Kanerva and President of the Inter-Parliamentary Union Saber Chowdhury.

At the press conference held following the meeting, Valeh Alasgarov, vice speaker of the Azerbaijani parliament, answered questions from reporters.

He stressed that the Nagorno-Karabakh conflict must be settled within the territorial integrity of Azerbaijan.

“We all hope the conflict will be settled peacefully. When talking about the Nagorno-Karabakh conflict, we should remember that the war is going on in the internationally recognized territories of Azerbaijan,” he said.

The vice-speaker noted that Azerbaijan should use all the tribunes of the international organizations as a member country to have its say and put forward its just position and demands.

“We have a strong state, economy and army, so we can have our say everywhere keeping head up. The ongoing processes in the world following the April clashes showed that balance of power had changed in favor of Azerbaijan. Many states support Azerbaijan’s position thanks to the right policy pursued by the country’s leadership,” he said.

Pro-Armenian Regnum agency resorted to provocation during the press conference. Chairperson of the Federation Council of Russia Valentina Matviyenko responded harshly to a provocative question “Why did some members of the Azerbaijani delegation leave the conference hall when Ilkka Kanerva, President of the OSCE Parliamentary Assembly, referred to the Nagorno-Karabakh conflict in his speech?” asked by a Regnum correspondent. She said the Azerbaijani delegation left the hall to attend the pre-planned meeting.

Ilkka Kanerva, President of the OSCE Parliamentary Assembly, repeated the common statements on the Nagorno-Karabakh conflict’s settlement that have always long made during international events.