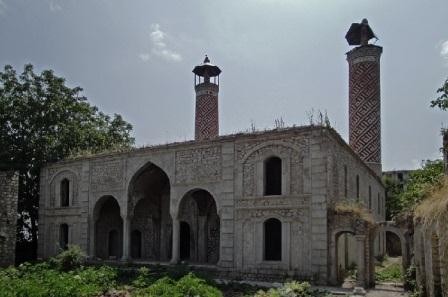 Armenians converted the only historical mosque left in Agdham to the military headquarter.

The information was obtained from the reportage on the occupied territories of Azerbaijan made by the correspondent of naviny.by website.

`I came across with a car which was full great number of military equipment and soldiers while I was travelling to Aghdam by taxi. The soldiers wanted to know who was travelling in the taxi but the car windows which were covered with thin films did not let them see anyone. Besides, I could not identify where I was. Only destroyed roads helped me to understand that I arrived in Aghdam`, the correspondent notes.

Approximately 30 000 Azerbaijanis were living in Aghdam until it was occupied during the war. Aghdam bazaar was famous. Armenians remember that you could buy anything such as jeans, weapons and others in this bazaar`, the correspondent states.

`Armenians completely destroyed everything when they occupied Aghdam in 1993. The only left in Aghdam was mosque. At early times, foreign tourists who traveled Karabakh captured the ruins of the city from the minaret of the mosque. It is impossible to go to the mosque after April fights. The Armenian side has established military headquarter there`, the correspondent adds.