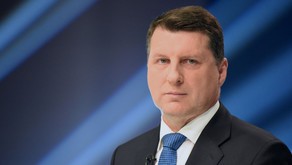 Latvia, as a firm supporter of strengthening the relations between the EU and Azerbaijan, believes that the cooperation in the framework of the Eastern Partnership should be continued. Preisdent of Latvia, Raimonds Vējonis said in his interview with The Business Year 2016 magazine.

"Latvia highly appreciates open and constructive political dialogue with Azerbaijan. The intensity of our dialogue is proven by the fact that our ministers of foreign affairs, economics, welfare, transport, and defence are in contact on a regular basis", Raimonds Vējonis stated.

According to him, Latvia is interested in expanding the cooperation with Azerbaijan in the field of education. He mentioned that seasonal direct flights are another important connection that brings our countries closer and increases our people-to-people contacts."Additionally, the Azeri community in Latvia is serving as a bridge between our two states and has become an integral part of the Latvian society", President of Latvia added.

Commenting on question about the trade turnover, the head of state stressed that Latvia's major commodity groups for exports to Azerbaijan included livestock and animal production (mainly dairy produce like cream and yogurt, for example), food products (alcoholic beverages and preserved fish), machinery and electrical equipment (centrifuges, monitors and projectors, and telephones), and the chemical industry and its related products (pharmaceuticals) in 2015.

The President of Latvia stated that, Azerbaijan is an important partner of the EU in the energy and transit sectors. According to him, Latvia highly values the role of Azerbaijan in the implementation of the Southern Gas Corridor and the ongoing work on the expansion of the South Caucasus Pipeline, the Trans-Anatolian Natural Gas Pipeline (TANAP), and the Trans-Adriatic Pipeline (TAP).

"Latvia, as a firm supporter of strengthening the relations between the EU and Azerbaijan, believes that the cooperation in the framework of the Eastern Partnership should be continued. Focusing our work on the implementation of the decisions made at the Eastern Partnership Summit in Riga and moving forward with the deepening of the differentiation principle are important", the head of Latvian state stressed.

According to him, An individual approach should be applied in cooperation with each country, taking into account the level of ambition in each country with regard to its cooperation with the EU. Raimonds Vējonis said that it also requires an update of the legal framework of the EU and Azerbaijan.