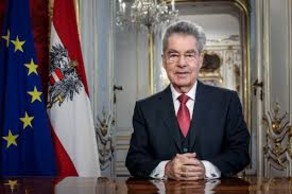 Economic relations between Austria and Azerbaijan can be qualified as well-established and on a solid base. I would like to mention that bilateral trade has increased nearly tenfold in the last 10 years. President of Austria Heinz Fischer said in an interview withThe Business Year magazine, commenting on the OSCE Austrian presidency in 2017.

"In 1H2015, Austria was Azerbaijan's fifth most important import partner. In 2010, the Austrian Federal Economic Chamber opened an office in Baku, with the aim of contributing to the development and expansion of bilateral trade relations. Last year, two business missions with more than 30 Austrian companies from various industrial sectors were organized. In addition, the office of the Austrian Federal Economic Chamber supported the activities of individual businesses and entrepreneurs", said the politician.

"President Ilham Aliyev has mentioned his eagerness to improve and diversify the Azerbaijani economy several times. Austria is ready to work together with Azerbaijan in this endeavor. Many Austrian companies are engaged in the planning, architecture, and construction business."