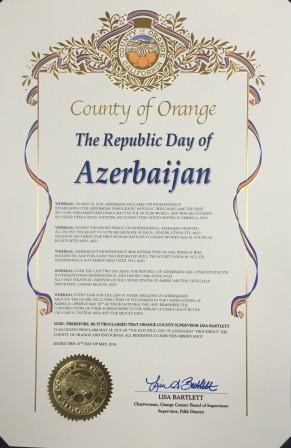 A number of cities of US, California State have announced May 28 as Azerbaijan's National Day.

The letter reads that Azerbaijan was proclaimed on May 28th, 1918, becoming the first secular parliamentary democracy in the Muslim world, recognized by other nations including the United States of America as well as gave right to women to vote not only in Muslim world, but also before the US.

After the collapse of the Soviet Union in 1991, it was stressed that Azerbaijan has strengthened its independence and sovereignty and that each year, millions of Azerbaijanis living in different countries, including the US, celebrate May 28 as National Day. Declarations, as well as emphasize Azerbaijan, the country which locates in the Caspian region, as an important strategic partner of the US.