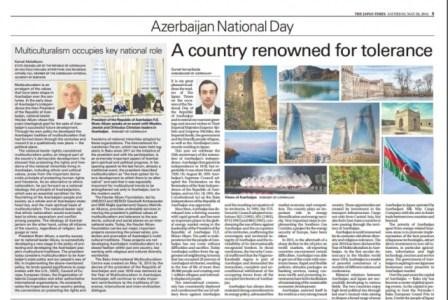 The Japan Times newspaper has dedicated a page to Azerbaijan at the initiative of the country`s Embassy in Tokyo.

In his article headlined “Multiculturalism occupies key national role”, Abdullayev says: “The Heydar Aliyev foundation, led by UNESCO and ISESCO Goodwill Ambassador and Milli Majlis (Parliament) member Mehriban Aliyeva, provides undeniable services in moving the president’s political values of multiculturalism and tolerance to the Academic, cultural and social planes on an international scale.” “Today, the Heydar Aliyev foundation carries out major, important projects concerning the preservation, protection and promotion of Azerbaijan’s multi- cultural traditions. These projects are not developing Azerbaijani multiculturalism in a closed fashion within just one country, but working with religious and cultural diversity worldwide. The Baku International Multiculturalism Centre was created on May 15, 2014 by the decree of the President of the Republic of Azerbaijan and year 2016 was declared as the year of multiculturalism in Azerbaijan. Azerbaijan will continue to make important contributions to the traditions of tolerance, intercultural and inter-civilization dialogue,” he says.

“Since then, Azerbaijan has developed into a thriving country with rapid growth and become an important player in the global energy market owing to the leadership of the President of the Republic of Azerbaijan Ilham Aliyev. The path to independence for the people of Azerbaijan has not come without difficulties and sacrifice. Today Azerbaijan suffers from the aggression of neighboring Armenia that has occupied 20 percent of Azerbaijani territories, resulting in the loss of life of more than 30,000 people and creating over 1 million refugees and internally displaced people.” The Ambassador says: “The international community has consistently deplored and condemned the use of military force against Azerbaijan and the resulting occupation of its territories. In 1993, the U.N. Security Council adopted resolutions 822 (1993), 853 (1993), 874 (1993) and 884 (1993), condemning the use of force against Azerbaijan and the occupation of its territories, reaffirming the sovereignty and territorial integrity of Azerbaijan and the inviolability of its internationally recognized borders.” “In those resolutions, the Security Council reaffirmed that the Nagorno-Karabakh region is part of Azerbaijan and demanded the immediate, complete and unconditional withdrawal of the occupying forces from all the occupied territories of Azerbaijan,” Imanov says.