Man wanted in an assault during Armenian protest 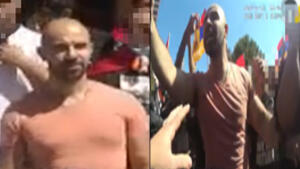 Help is needed to identify man police say was involved in an assault during a protest at the Azerbaijan Consulate in Brentwood last month.

Axar.az reports that Armenian Americans demonstrated on July 12 outside the consulate over border tensions between Armenia and Azerbaijani, leading to a melee involving about 100 protesters and counter-protesters. Police say they are investigating at least three of the assaults as hate crimes.

Los Angeles police released images Wednesday of one man who was accompanied by two others in hitting someone in the head with their fists and throwing him to the ground.

All three suspects were described as Middle Eastern men in their mid-20s to 30s. Police say the man whose image was released is believed to be between 25 and 35 years old, between 5-foot-5 and 5-foot-8, about 160 to 180 pounds and had a bald, shaved head, and a black beard. He was photographed wearing a light orange or pink-coloured shirt and wore an unknown-type wrist band on his left wrist.

The other two suspects wore black T-shirts and blue jeans. No further information was released about them.

Police did not say if this incident is one of the three being investigated as a hate crime.