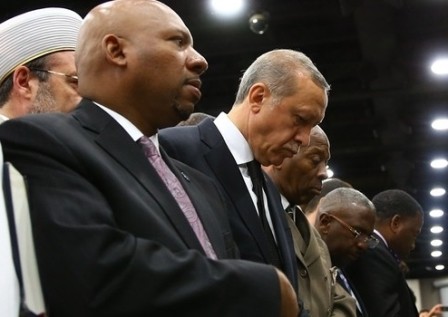 Turkish President Recep Tayyip Erdogan, who flied to Kentucky State to attend the burial ceremony of legendary boxer Muhammad Ali, has decided to cut short his visit and return to Turkey.

The Turkish president attended the funeral prayer in Louisville yesterday and was due to be present at the burial ceremony today. However, Erdogan changed his mind and decided to return to Turkey after joining an Iftar feast with Meskhetian Turks in Louisville, Turkey’s Hurriyet newspaper reported.

The president did not elaborate on details of his decision. According to the pro-opposition newspaper “Sözcü”, Erdogan wanted to lay a cover brought from the Kaaba on Muhammad Ali’s coffin but his wish was not welcomed by people there, who said to him, “We’ll do it ourselves.”

Moreover, Erdogan reportedly asked President of the Presidency of Religious Affairs Mehmet Gormez to recite the Quran but the latter was not allowed to do so. According to the newspaper, that is the reason Erdogan cut short his visit to the US.