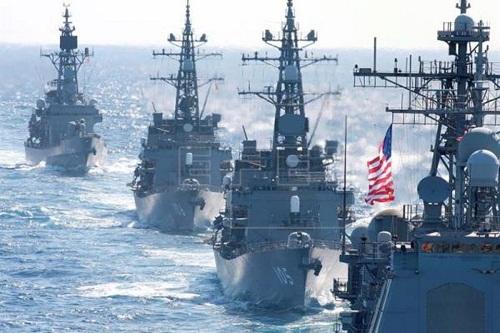 A US Coast Guard cutter fired 30 warning shots at over a dozen Iranian fast boats after they conducted "unsafe and unprofessional manoeuvres" in the Strait of Hormuz, the Pentagon said on Monday.

Axar.az reports citing foreign media that the 13 Iranian Islamic Revolution Guards Corps Navy ships "failed to exercise due regard for the safety of US forces as required under international law while operating in close proximity to US naval vessels that were transiting the Strait of Hormuz," Pentagon spokesman John Kirby told reporters.

The Iranian vessels got to within 150 yards of the US ships as they were escorting the guided-missile submarine USS Georgia, said Kirby.

"After following all the appropriate and established procedures involving ships’ horn blasts, bridge-to-bridge radio transmissions and other ways of communicating, the US Coast Guard Cutter Maui fired approximately 30 warning shots from a .50 caliber machine gun. After the second round of warning shots the 13 fast attack craft from the IRGCN broke contact,” he added.