"We had a constructive meeting with the PACE president" 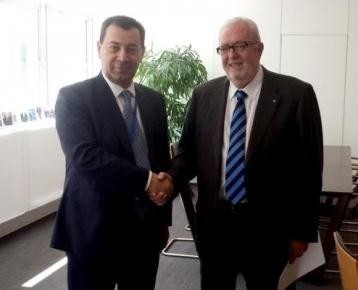 It’s necessary to hold meetings of Azerbaijani and Armenian delegations at the Parliamentary Assembly of the Council of Europe (PACE), said Samad Seyidov, Azerbaijani MP, head of the Azerbaijani Delegation to PACE.

He made the remarks during a meeting with PACE President Pedro Agramunt on June 23.


Speaking to APA’s Europe bureau, Samad Seyidov said he discussed with Agramut a number of issues as well as the Nagorno-Karabakh conflict and the possibility of holding meetings at PACE between the Azerbaijani and Armenian delegations.


The main topic of the meeting was the Armenian-Azerbaijani Nagorno-Karabakh conflict, the MP said, stressing the need to hold meetings of the Azerbaijani and Armenian delegations at PACE.


“We are always ready for these meetings, but the Armenia side is refusing them. I am confident that they will sooner or later sit at the negotiating table. We are trying to hold such a meeting and parliamentary discussions on both the conflict and activities of the Azerbaijani and Armenian delegations within the PACE. I think it is a very important issue,” said the MP.


Seyidov added that the reforms recently carried out in Azerbaijan were also discussed during the meeting.


“I welcome the outcome of this meeting and I believe that such meetings are very useful for us,” he concluded.