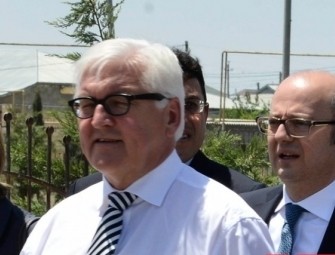 As part of his visit to Azerbaijan, OSCE Chairperson-in-Office, German Foreign Minister Frank-Walter Steinmeier met with a number of IDPs from Azerbaijan’s Shusha city in Baku June 30.

Steinmeier was informed about the history of Shusha, as well as Khankendi which were founded by Shusha khans. He then met with a number of IDPs outside the school.

Bayram Safarov, head of the Shusha district executive authority, chairman of the “Azerbaijani Community of Nagorno-Karabakh” Public Union, said that all necessary conditions were created in the settlement built for IDPs from Shusha, but they want to return to Shusha, their native lands.

Steinmeier asked whether the young people want to return to Shusha.

Safarov said that not only young people, but even children want to return to Shusha. “I have eight grandchildren, and every day they ask me when we will return to Shusha,” he noted.

Ramig Maharramov, who was born in Khankendi and lived in Shusha, showed the photos of their home in Shusha before and after destruction as a result of the occupation.

He said the photo of their home after destruction was taken by one of European photographers who visited Shusha. Other IDPs said that they were living in peace, friendly atmosphere with the Armenians till the conflict and expressed readiness for such co-existence with the Armenians in Nagorno-Karabakh after the resolution of the conflict within the territorial integrity of Azerbaijan.

Steinmeier was also shown the photo of monument erected in Karabakh in 1978 on the occasion of the 150th anniversary of Armenians’ settlement in Nagorno-Karabakh.

Safarov said that the Armenians celebrated the 150th anniversary of their settlement in Karabakh in 1978 and erected the monument in this regard. “Then, Armenians destroyed the monument themselves,” he added.
Steinmeier pledged the OSCE and Germany will make efforts to resolve the Nagorno-Karabakh conflict.