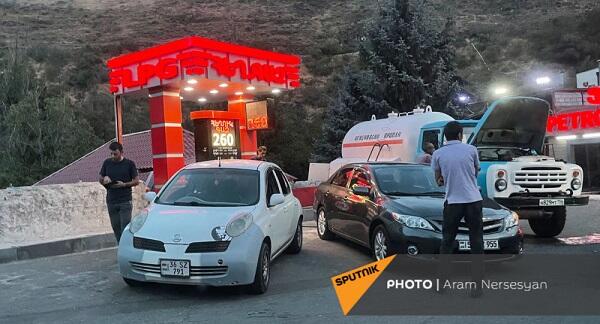 The construction of the Azerbaijani customs and border post on the Gorus-Gafan road affects the prices of energy carriers in the domestic market of Armenia.

Axar.az reports the statement came from the director of the Armenian Energy Security Institute Vahe Davtyan.

He claimed that during this period, the flow of Iranian cars decreased, resulting in fuel shortages. As a result, on October 29, fuel prices rose in Armenia. But this will not be the end.

According to him, cars in Armenia run on liquefied gas for the price:

"The point is that liquefied gas is delivered to Armenia in large trucks. The alternative detours built by the Armenian government for these cars are very narrow and impassable.

He also said that the rise in prices will also be caused by rising prices at the global level.

It should be noted that the news that SOCAR opened a new gas station on the Gorus-Gafan road yesterday caused a serious resonance. Many believe that lower prices at SOCAR's gas station, as well as the incomparable convenience of the Gorus-Gafan road from the alternative road, will stimulate the use of this road and the SOCAR gas station by Armenian citizens. This is Azerbaijan's first influence on the Armenian market.