​The number of victims exceeds 200 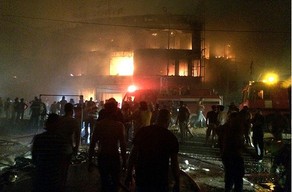 The terrorist attacks in Baghdad have killed more than 200 people.

This was said by Iraqi officials.

A car with explosives blew up on Saturday in a busy place at night in Al-Karrada. Islamic State claimed being responsible for the attack.

A three-day mourning was declared due to the attack.

The Iraqi Embassy in Baku opened a book of condolences.