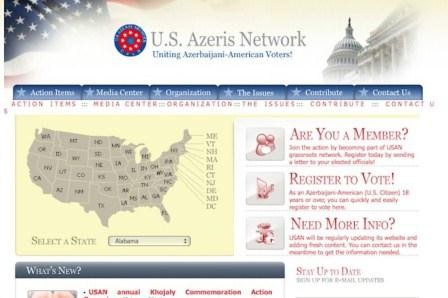 US Azeris Network (USAN) has for the ninth time launched the annual campaign to increase awareness of the American public of the Khojaly genocide.

In a statement addressed to the US congressmen, parliaments of states and legislators, the US State Department and American media, USAN describes the military crime committed in Khojaly by the Armenian armed forces with the help of the 366th motorized rifle regiment of the former USSR as one of the most horrific crimes in modern history.

The evidence presented by a number of foreign journalists including Hugh Pope, Thomas Goltz, Tom DeWaal, as well as human rights organizations such as Human Rights Watch attest to the atrocities committed against civilians in Khojaly, the statement says.

USAN also says that parliaments and governors of twenty US states have adopted proclamations recognizing the Khojaly massacre. The Azerbaijani people will always remember the day of terror against Azerbaijani civilians in Khojaly, as the Americans remember the terrorist attacks of September 11, 2001, the statement says.

The statement also hails US-Azerbaijani joint fight against terrorism, saying Azerbaijan's contribution to peacekeeping missions in Iraq, Afghanistan and Kosovo is of pivotal importance to both countries.