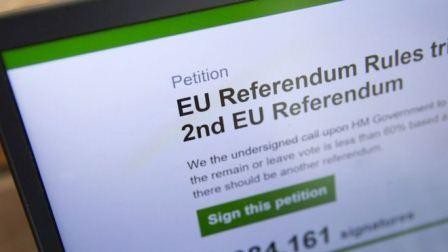 The government has rejected an online petition, signed by more than 4.1 million people, calling for a second EU referendum to be held.

An email to those who signed the petition said the prime minister and government had "been clear that this was a once-in-a-generation vote".

It said the decision "must be respected", and "we must now prepare for the process to exit the EU".

Meanwhile, US President Barack Obama said he believed the UK would quit the European Union despite speculation the vote for Brexit could somehow be reversed.

"I think we have to assume that a referendum having been passed with a lot of attention, a lengthy campaign and relatively high participation rates is going to stick," he told a news conference at the end of a Nato summit in Warsaw.

The online petition gained more signatures than any other on the parliamentary website in the wake of the EU referendum result.

It had been set up by William Oliver Healey ahead of the referendum and had been signed by 22 people at the time of the result.

It states: "We the undersigned call upon HM Government to implement a rule that if the remain or leave vote is less than 60%, based on a turnout of less than 75%, there should be another referendum."

In its official response to signatories, the Foreign Office said the law which had set the rules for the referendum did not specify minimum conditions on turnout or margin of victory.

It added that the referendum was "one of the biggest democratic exercises in British history with over 33 million people having their say".

The email said the petition would be considered for a parliamentary debate by the Petitions Committee because it had received more than 100,000 signatures.

The committee is made up of 11 cross-party MPs and "almost always" debates petitions that reach 100,000 signatures.

It previously investigated the petition for fraud, removing 77,000 signatures which were found to be false.