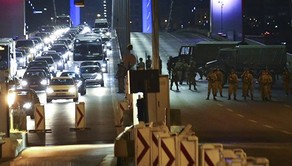 Bosphorus Bridge in Istanbul, closed on the night of July 16, during an attempted military coup in Turkey, partially opened after revels’ surrender to the authorities.

According to rhe Anadolu Agency, both bridges linking the Asian and European shores of Bosphorus, were closed on July 15.

Last night a group of military members attempted to make a coup in Turkey.