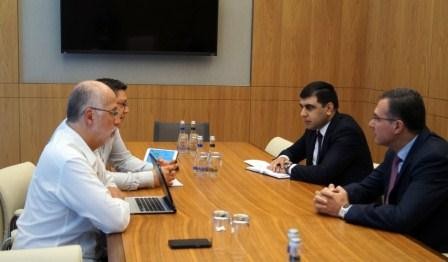 Ambassador of Mexico to the Republic of Azerbaijan Rodrigo Labardini accompanied by Head of the Competitive Technical Intelligence Unit of the Mexican Institute of Petroleum (IMP) Victor Ortiz has met with Executive Director of the State Oil Fund of Azerbaijan (SOFAZ) Shahmar Movsumov.

Rodrigo Labardini highlighted the development of the oil sector in Mexico. He noted that the significant growth in the economic sector, the increase of foreign trade, creation of a propitious environment for investment and the significant contribution of the Mexican energy sector in the last two decades has positioned Mexico as the eleventh largest oil producer in the world, the nineteenth natural gas producer and a key player in the supply of hydrocarbons on the continent of America.

In his turn, Victor Ortiz spoke about the main functions of the institution that he represents. Informed that currently the IMP has a staff over 3,000 with 50 research projects that have resulted in the registration of 900 patents. Mr. Victor expressed the wish of possible collaboration in innovations and administration of technology in the oil sector between Mexico and Azerbaijan.

At the end of the meeting, Mr. Shahmar Movsumov demonstrated an interest in the development of new technologies of IMP and said that the fund would be willing to begin talks to explore the possibility of investing in some of the projects through the Fund for Africa, Latin America and the Caribbean.