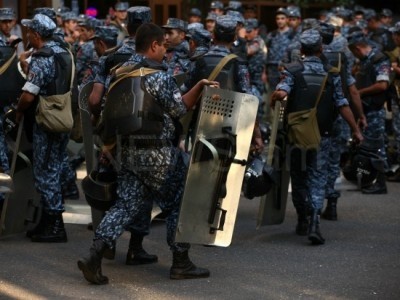 Although the police have warned the demonstrators in Yerevan’s Khorenatsi street to move the rally to another place, the street is again crowded today.


The people are coming to Khorenatsi street to take part in the rally. At the same time, large number of police forces have been brought to the site.


The traffic in Khorenatsi street is blocked.


Earlier, the police issued a statement, requiring the demonstrators to change the place of the rally from Khorentasi street to some other place. In order to prevent a threat to lives and health of the participants of the meeting, as well as public safety, nothing else can be done other than to move the meeting to another place. Otherwise, the police will have to use other means, in accordance with the law, to stop the rally”, the statement reads.


The demonstrators have announced that they are not going to obey the requirements of the police and are going to hold today’s rally again in Khorenatsi street.