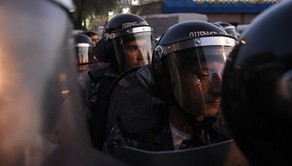 According to the Sputnik-Armenia, it was agreed that they will meet again today at 20:00 at Freedom Square.

Law enforcement officials have warned protesters that the rally in the street Khorenatsi near the captured police station that cordoned by police is illegal. In this regard, yesterday more than 150 people detained, but during the day, almost all of them were released.

Notably, on July 17, an armed group seized police station in Yerevan. One policeman was killed during the capture and four people wounded. The invaders demand the release from custody of Colonel Zhirayr Sefilyan, one of the leaders of the opposition movement “Founding Parliament” and “New Armenia”.