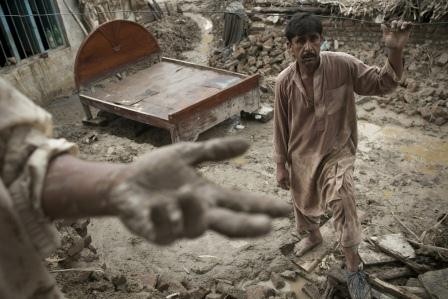 Geo News reported that Sindh's provincial capital of Karachi was badly hit by the rains where at least 14 people were killed and several others got injured.

Karachi's famous NGO Edhi Foundation said that eight people died of electrocution in the metropolis whereas six others were killed in separate incidents of roof collapse.

Seven people were killed in separate rain-triggered accidents in other districts of the province.

Road and air traffic was disrupted due to heavy downpour, which started on Friday afternoon and continued till Sunday.

The met office said that the city received 30mm to 56mm of rain on Sunday.

Eight people were killed, five injured and eight others went missing in Harnai district of Balochistan over the last two days, officials said.

Deputy Commissioner Asmatullah Qureshi of Harnai said that six cars were drowned at the famous lakeside picnic point Zard Aloo of the district due to flash flood.

The official said that the floodwater washed away some 21 people inside the cars with it, out of which bodies of eight have been retrieved till Sunday afternoon.

He said that the search of the eight missing people continues in the area.

The met office said that the rain-thunderstorm with isolated heavy falls is expected to hit parts of Sindh, Balochistan and other parts of the country over the next 24 hours.

The torrential rains may generate flash flooding and landslides in the vulnerable areas of the country and the rainwater may wreck havoc in the low-lying areas.