Ambassador of Morocco departed from Azerbaijan 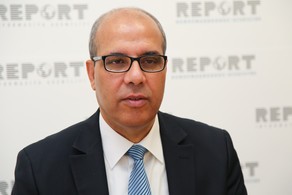 The term of diplomatic mission of ambassador of Morocco in Azerbaijan Hassan Hami has expired.

The ambassador will leave Azerbaijan this fall.

The Moroccan side has already submitted the candidacy of the new head of the diplomatic mission of Morocco in Baku and soon his name will be announced.

Hami worked in Baku since April 2009. He is the dean of ambassadors of Muslim countries in Azerbaijan.