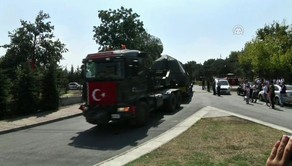 Tanks of the 66th Mechanized Infantry Brigade in Başakşehir, Istanbul are being moved out of city.

According to the information, the tanks will be replaced in Eastern Thrace region of Turkey, Çorlu district of Tekirdağ province. This region is considered the country's second largest dislocation area in Eastern Thrace after Istanbul. Çorlu is located at 38 km distance from Tekirdağ center.

A few days ago, Turkish Defense Minister Fikri Işık has stated that moving of military units, dislocated in Ankara and Istanbul, is planned till September 15. The minister said that some military units will be moved in 10 days, some in 20 days, while others within a month: 'Their territory will be provided for use of the people.

Democracy Park will be laid out in the territory of Akıncı Air Base'.