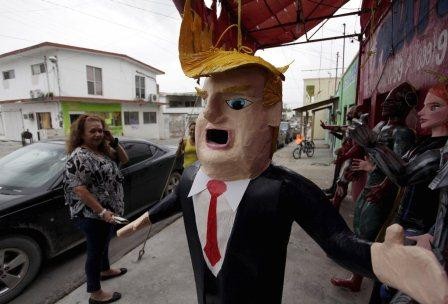 Donald Trump will travel to Mexico City on Wednesday for a meeting with Mexican President Enrique Peña Nieto, just hours before he delivers a high-stakes speech in Arizona to clarify his views on immigration policy.

Peña Nieto last Friday invited both Trump and Democratic presidential nominee Hillary Clinton to visit Mexico, his office said in a statement provided to The Washington Post on Tuesday night.

Trump, sensing an opportunity, decided over the weekend to accept the invitation and push for a visit this week, according to the people in the United States and Mexico familiar with the discussions.

Late Tuesday, Trump and the Mexican president confirmed on Twitter that they will meet Wednesday.

Peña Nieto later tweeted that he believes in dialogue in order to “promote the interests of Mexico in the world and, principally, to protect Mexicans wherever they are.”

The visit comes after Trump has wavered for weeks on whether he will continue to hold his hard-line positions on the central and incendiary issue of his campaign, in particular his call to deport an estimated 11 million immigrants who are living in the United States illegally.

The people informed of Trump’s plans spoke on the condition of anonymity because of the sensitivity surrounding the matter. They said earlier Tuesday that talks between the Trump campaign and Mexican officials were ongoing, with security concerns still being sorted out.

Trump is scheduled to hold fundraisers Wednesday morning in California and deliver his immigration speech in the evening at the Phoenix Convention Center. His trip to Mexico will come between his events.

The Clinton campaign shrugged off Trump’s trip as a distraction from his polices. “What ultimately matters is what Donald Trump says to voters in Arizona, not Mexico, and whether he remains committed to the splitting up of families and deportation of millions,” wrote Jennifer Palmieri, a senior Clinton campaign adviser, in a statement.

A Clinton campaign official confirmed that Clinton received a letter requesting an in-person meeting with the Mexican leader. Clinton has not yet accepted.

The aide requested anonymity to discuss the potential meeting.

The invitation is a stunning move by Peña Nieto, given the grief that Trump’s campaign has caused the Mexican government over the past year. From calling Mexican illegal immigrants rapists and criminals, to vowing to build a wall along the southern border, to threatening to undo the North American Free Trade Agreement, Trump has caused growing alarm in Mexico. Peña Nieto himself likened Trump’s rhetoric to that of Adolf Hitler and Benito Mussolini, in a March interview with a Mexican newspaper.

To the delight of his U.S. rally crowds, Trump has repeatedly promised to force Mexico to pay for his proposed border wall. Peña Nieto and other Mexican leaders have dismissed the idea as preposterous.

“There is no way that Mexico can pay [for] a wall like that,” Peña Nieto said in a July interview, adding that he did not agree with Trump’s frequent characterization of illegal immigrants from Mexico as rapists and killers.

Trump’s newly installed campaign chief executive, Stephen K. Bannon, played a key role in devising the Wednesday stop while Trump met Sunday with his aides and family at Trump National Golf Club in Bedminster, N.J., according to two people who have been briefed on the campaign’s deliberations.

Bannon, who previously headed the conservative website Breitbart News, made the case to the group that Trump must underscore his populist immigration views in the final weeks of the general-election campaign, perhaps with an audacious gesture.

Peña Nieto’s invitation was brought up, and Bannon said it offered Trump an opening to make headlines and showcase himself as a statesman who could deal directly with Mexico.

Trump was intrigued by Bannon’s proposal and agreed, but not all aides and allies were as enthusiastic, the people said.

Trump, who appointed Bannon to his post and veteran pollster Kellyanne Conway as campaign manager this month after the resignation of campaign chairman Paul Manafort, has been navigating a flood of conflicting advice this summer about where to land on immigration as he has publicly wrestled with himself on the details of his position.

Following Sunday’s strategy session, plans came together quickly but not without hurdles and some tensions.

Early this week, representatives for Trump contacted the U.S. Embassy in Mexico about his intentions, according to a person in Mexico familiar with the communications between the two sides.

Trump’s representatives were told privately by officials that it would be logistically difficult for Trump to visit. But the businessman’s proxies insisted that Trump would not delay his plans, the person said.

Overseas visits by senior U.S. officials normally require weeks of intricate planning on both sides, as every movement and meeting is plotted. When more security is required, such trips become even more complicated.

Security staffs traveling with the visitor are usually beefed up. While Mexico is not considered a hostile place, the crime level is high and Trump, should he appear in public, would require significant protection.

The invitation — and particularly a visit — seems certain to cause a backlash in Mexico City, where Trump is widely disliked. Mexicans have bashed Trump piñatas, burned him in effigy during public street parties and staged plays about him as a comic villain.

When Trump declared his candidacy in 2015, he was seen by many in Mexico as insulting but not to be taken very seriously. Mexican diplomats back then scoffed at the notion that Trump was a serious candidate or that the government was worried about his ascent.

That’s all changed now. Many of Mexico’s government and business elite have grown skittish about the potential of a Trump presidency and the economic damage that his policies might inflict. The United States is Mexico’s most important trading partner.

Earlier this year, Peña Nieto swapped out key diplomats, including the Mexican ambassador to the United States, to have a more aggressive presence advocating for the importance of a strong relationship between the two countries.

Several Mexican officials were surprised to learn on Tuesday that Peña Nieto had extended an invitation to Trump.

“This is an extraordinarily surprising, but welcome, development, whether it ends up happening or not,” said Andrew Selee, a Mexico expert at the Wilson Center in Washington. “Mexico is a vital country for U.S. foreign policy and economic interests. The second destination for exports and the country of origin of a tenth of all Americans.”

Several Mexican politicians were quick to criticize the meeting. Miguel Barbosa, an opposition senator with the left wing Party of the Democratic Revolution, tweeted about Trump: “Your presence in Mexico is not welcome. Get out! You come to take a photo with those you’ve offended.”

“It is a political error by [Peña Nieto] to use this lying anti-Mexican,” Barbosa wrote in another tweet.

A Mexican presidential hopeful with the right wing National Action Party, Margarita Zavala, tweeted that even though Trump was invited to Mexico, he was not welcome.

“Mexicans have dignity and we reject your discourse of hate,” she wrote.

Trump’s Phoenix speech later Wednesday is expected to add to the day’s drama, with declarations by candidate about where exactly he stands on the details of immigration policy and border security.

Bannon and Trump speechwriter Stephen Miller have had a heavy influence over the speech’s contours, the people familiar with the campaign said. Miller is a former aide to Sen. Jeff Sessions (R-Ala.), a Trump confidant who has urged him to hold to his tough positioning and rhetoric on immigration.

And while Trump’s associates have framed his trip as presidential-style outreach, the surprise gambit also fit his career-long tendency for theater and confrontation.