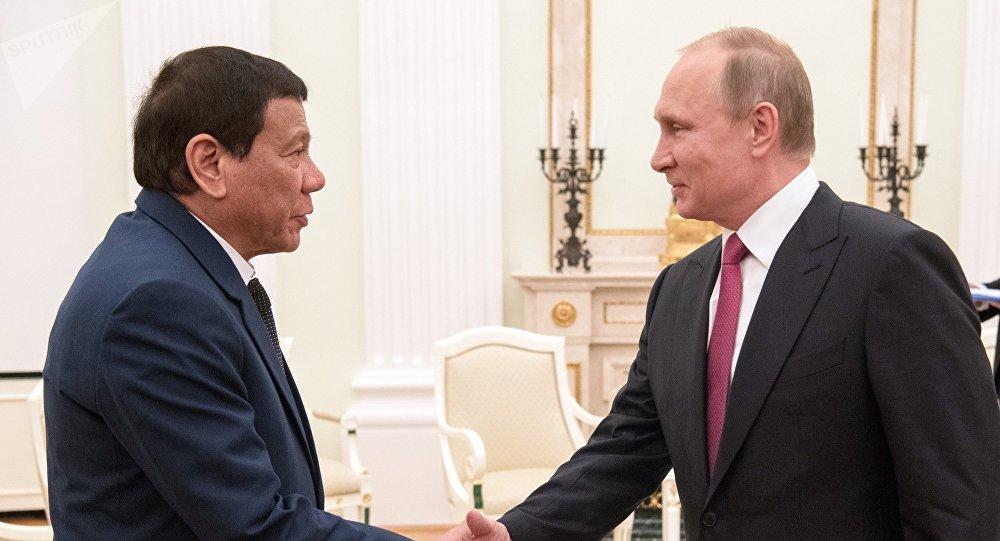 Russian President Vladimir Putin has met with his Philippine counterpart Rodrigo Duterte on the sidelines of the APEC summit in Da Nang and discussed military cooperation between the two countries.

"We are ready, as agreed, to develop our relations, including in the military sphere, the defense industry cooperation, and, of course, we need to pay special attention to economic ties," the Russian president said.

Putin has named the fight against terrorism as one of the common tasks of Russia and the Philippines.

"I remember how you had to interrupt your visit to Russia in connection with the terrorist attacks of in your country, and I remember what you told me when leaving, that you need to restore order, strike these terrorists. I want to congratulate you on that, your success with that."

In his turn, Duterte has thanked Moscow for the assistance with weapons amid the fight with Daesh-linked militants in Marawi.

"I would like to express my gratitude for the timely assistance that Russia provided us with by giving trucks and weapons. This was particularly necessary for us to replenish our reserves," Duterte said.

In late October, the Philippine army completed its military operation in Marawi, liberating the city from the 30 remaining militants of the Daesh-linked Maute group (outlawed in Russia) and rescuing all hostages after 154 days of the siege.

The standoff between government forces and terrorists escalated in May, when the Islamists from the Maute group attacked Marawi, located on the island of Mindanao, forcing the government to start a military operation in the region. The conflict led to numerous victims, the evacuation of civilians from the city, and the declaration of martial law on Mindanao by Philippine President Rodrigo Duterte. He declared the liberation of Marawi on October 17.

The talks were held in the wake of a batch of arms deliveries to the Philippines carried out by Moscow in late October, with the package reportedly containing nearly 5,000 Kalashnikov assault rifles, about 1 million cartridges and 20 military trucks.

"Those timely deliveries of weapons that we received from Russia were transferred to the special units of our police, and this was of great importance. Now I intend to continue buying such weapons," Duterte has stated.

The president of the Philippines also commended the quality of Russian arms.

"These are precision weapons. We had to engage in a new type of war, we had to fight against snipers, because they posed the main threat to our forces and these people, just like in Syria, hid behind walls, in shelters, and we waged war, retaking everything building by building," Duterte indicated.

Duterte told Putin that he was seeking to create a strong army and police in the country before his presidential mandate expires. He added that the Russian assistance had helped to accelerate the fight against terrorism in the Philippines.

"The weapons are extremely important, but your determination and the readiness of the security forces to fight against terrorism is the most important," Putin said in response.

Philippine President Rodrigo Duterte has already expressed Manila's interest in advanced Russian weapons during his previous meeting with the Russian counterpart in May. He had stated that Philippine want, in particular, to buy Russian helicopters, planes, as well as precision-guided weapons to help combat the terror threat.