From Mumbai to Melbourne 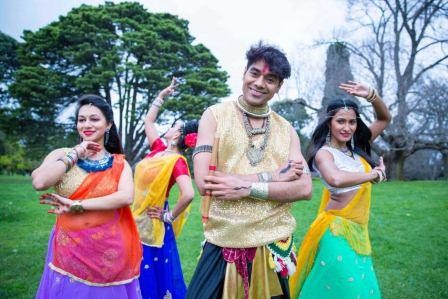 Anil Bhoj grew up in Bombay, now known as Mumbai — the densely populated city which is renowned for its theatrical musicals.

It may be the birthplace of Bollywood, but as a young man he was encouraged to suppress his love of dance outside of weddings and family functions.

"My passion was dancing since childhood," he said.

"It's a stereotype that we dance in India, but then if you want to make it as a career, that's not a very good thing for the family.

"Dancing is a big no, especially for guys.

"So due to peer pressure I had to stop dancing."

He studied engineering and found a job, got married and had children.

"This is what a very normal Indian person has to do in India," he said.

"There is so much pressure there that you have to do something in life, and that something is not a hobby like dance, especially classical Bollywood is a big no for boys. If you do it, you have to fight your way through."

Anil and his wife decided to migrate to Australia in 2008.

While it was initially a roller coaster ride to move to a new country with no friends or family, for the first time, he found his soul in Melbourne after joining Melbourne dance company Bindaas Bollywood.

"I was trying to find my spirit in other things, but no it was in dance.

"I found my spirit with dance in Melbourne.

"I always dance as if no one is watching."

For fellow performer Aditi Joshi-Sharma, the dance school has also helped her find her confidence in a new country, after marrying and moving here seven months ago.

Trained in Bharatanatyam, an Indian classical dance form, she said she loved how receptive the Australian audience was to different dance forms.

"I got to know about the different cultures, because Melbourne is so multicultural, that's what makes this city so great," she said.

"When I moved here it was not that easy, thinking about moving to a new country. I am a shy person, really. But when it comes to dancing I am not shy.

"I have made friends from different countries; Sri Lanka, Maldives, Pakistan and Norway. So it enhances your dancing skills."

But if there is one Indian cultural element Anil Bhoj would like to see Melburnians embrace, it is the wet weather.

"If it's raining, just start dancing," he said.

"In Bombay, the city is totally packed with people, and when it starts raining, everything stands still, the trains stop which is the lifeline of Bombay city.

"We just start dancing when it rains.

"I think when it rains in Melbourne we should just all start dancing."