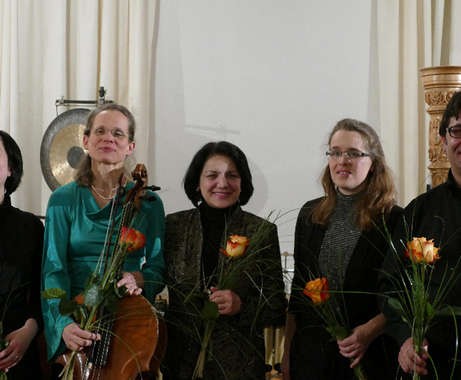 Frangiz Alizada’s masterpiece "Schwindende Schönheit" (Disappearing Beauty ) for viola d’amore, baroque cello, percussion and harp was performed by Andreas Ticozzi (viola d’amore), Jessica Kuhn (baroque cello), Rie Watanabe (percussion) and Mirjam Schröder (harp) during the course of the concert series “sonorizzonte” at Nymphenburg Palace in Munich on March 11, 2016. The premiere was a great success and gained a lot of publicity.

The work “Schwindende Schönheit” was completed in 2015 in response to a commission from “sonorizzonte” and sponsored by the Cultural Department of the state capital Munich.

“We are currently living in a time in which entire civilisations, cultures and states are perishing. Baghdad - the actual hero from the ‘Tales of 1001 Nights’ - has been lost for ever; manuscripts and exhibits from the Baghdad museums have been destroyed. The city of Aleppo, in which the magnificent poet and Sufi Imameddin Nasimi was buried, was bombed. It was in this city that Yo-Yo Ma once performed my piece ‘Ask Havasi’ as part of the transcontinental project ‘Silk Road’ and enthusiastically related his impressions of this splendid city, which now irretrievably belongs to the past.

Another devastating event is the destruction of the ancient oasis city of Palmyra (in Homs) - a mystical beauty the widely varied illustrations of which were present in our geography and history books for many years. I had always hoped to travel there and see Palmyra one day. This will no longer be possible, for Palmyra has disappeared for ever. I wonder how many more cultural treasures will disappear. When will we reach the end of this series of tragedies? My work ‘Schwindende Schönheit’, written for the Munich ensemble ‘sonorizzonte’, deals with this question,” Firangiz earlier said while commenting on her work.
After the concert the musicians thanked Frangiz Alizada for her participation at the premiere as well as brilliant rehearsals, after which they have heard new important details, which perfectly contains uniqueness and creativity that might be overlooked.

On the same day, young Russian cellist Konstantin Manaev performed the musical composition of Firanghiz "Ask havasi" at his solo concert in the city of Mannheim, Germany.

Moreover, the composition "Schwindende Schönheit" was also performed by the Australian band "Ensemble Plus" at the concert hall of "ORF" studio in Vienna.

Frangiz Alizada is an Azerbaijani composer and pianist, currently living in Germany. She is best known for her works which combine the musical tradition of the Azerbaijani Mugam and 20th century Western compositional techniques, especially those of Arnold Schonberg and Gara Garayev.