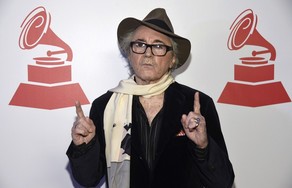 Gato Barbieri, a saxophonist whose highly emotional playing helped expand the audience for Latin jazz, and whose music for the film “Last Tango in Paris” won a Grammy Award died on Saturday in New York. He was 83.

His death was confirmed by Jordy Freed, the vice president for marketing and communications at the Blue Note Entertainment Group, parent company of the Blue Note Nightclub in Greenwich Village, where Mr. Barbieri often performed. Mr. Barbieri’s wife, Laura, told The Associated Press that the cause was pneumonia.

Mr. Barbieri recorded dozens of albums in a career that began in the late 1940s in his native Argentina, and continued recording and performing into the 21st century.

Although he was heavily influenced by John Coltrane and other saxophonists, his big, lush sound was distinctly his own and instantly recognizable.

Reviewing a performance by Mr. Barbieri in 1983, Jon Pareles of The New York Times wrote that he “makes some of the most raucous sounds ever to emerge from a tenor saxophone,” adding: “His horn screams, grunts, honks, bleats, groans. Even in ballads, he works up to a hefty, throbbing tone that sounds like it could burst at any moment.”