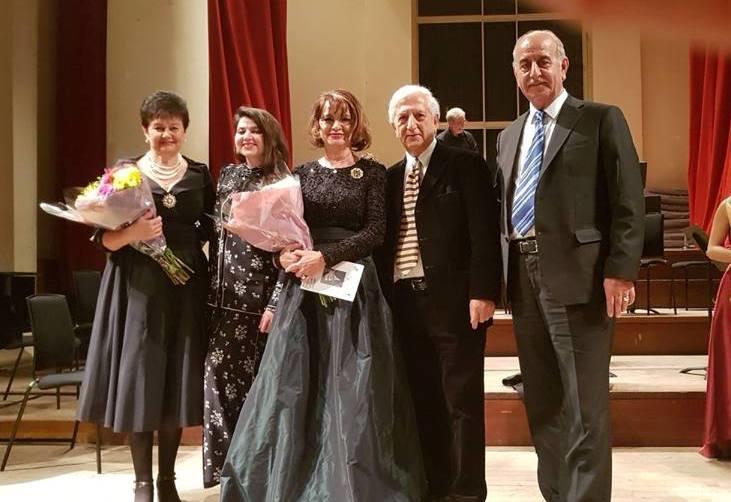 Centenary tribute to Jevdet Hajiyev – a giant of Azerbaijani music – in the shadow of Westminster.

Axar.az reports that born in Sheki, Jevdet Hajiyev (1917–2002) bestrode Azerbaijani classical music like a colossus, with a long and active career that spanned the entire Soviet period, his final work being dedicated to the victims of Black January in 1990, when civilians were massacred in Baku after an uprising against Soviet rule. On 24 November, the deconsecrated 18th century ecclesiastical baroque surroundings of St. John’s, Smith Square, resounded to his emotive and evocative music. The concert was organised by Pervin Muradova, daughter of Jevdet Hajiyev, with the sponsorship of the Anglo–Azerbaijani Society, their sponsor Rapid Solutions, and Azerbaijan House, with the support of The European Azerbaijan Society (TEAS). It was attended by in excess of 200 Azerbaijanis, diplomats, musicians and classical music experts and aficionados.

Jevdet Hajiyev studied at the Azerbaijan State Conservatoire under the father of Azerbaijani classical music – Uzeyir Hajibeyli – and later under Dmitri Shostakovich in Moscow. However, he remained influenced by Azerbaijani traditional compositions, particularly mugham and ashiq music. He is renowned for his work in developing the Azerbaijani symphonic tradition. Dmitri Shostakovich commented: “Jevdet Hajiyev is a truly talented composer with a unique ability in writing music of symphonic depth and philosophical content.”

The concert followed celebrations of his life and work in April at Carnegie Hall and July in Vienna, featuring many young and talented musicians from around the world. Pervin Muradova commented: “Tonight, we are celebrating the work of the great Azerbaijani composer, Jevdet Hajiyev, who was a remarkable cultural ambassador for his country and an amazing humanitarian. He was deeply dedicated to cultivating the talent of young musicians. This city of London holds a special place in my heart, as it is where his music was brought back to life, when Elena Cobb of EVC Music Publications published his piano works this year, in a centenary edition, after a gap of over 60 years.

“He was born in Sheki – along the ancient Silk Road – which was a melting pot of ancient eastern and western civilisations. This is reflected in our programme, where you can hear traditional Azerbaijani music intertwined with western classical music and you can see and hear the combination of traditional Azerbaijani and western instruments. This evening is filled with beautiful music, and features some supremely gifted young musicians and distinguished performers from around the world.”

Mrs Muradova then explained the work of her Music Education and Autism Foundation and outlined how the Azerbaijani–American Cultural Foundation (www.azerbaijaniamerican.com) of Miami, Florida, supports this under the Presidency of Tohva Eminova.

The programme included the UK premiere of the evocative Azerbaijani Rhapsody, composed by Alexander Peskanov in memory of Jevdet Hajiyev and his beloved wife, the Azerbaijani dancer and choreographer Amina Dilbazi, who were married for 63 years. This featured a range of young pianists aged 11 to 20 years, with mugham interpolations by Jeffrey Werbock (tar and kamancha), President, Mugham Society of America, being closely followed by the four movements of Peskanov’s Spring Concerto, this time featuring pianists aged nine to 11 years.

Other music included Hajiyev’s rhapsodic Sonata, recently included in the EVC collection of his piano works, played by Chinese pianist Vivian Fang Liu. His exhilarating Scherzo for violin and piano was performed by the duet of Azerbaijani/Turkish violinist Elvin Hoxha-Ganjiyev and UK-based Lithuanian/Russian pianist Jelena Makarova.

All audience members were touched by the performance of nine-year-old Chinese pianist Haowen Xiao, resplendent in his black tie, who performed the Joke and Fairy Tale Ballade from Hajiyev’s Musical Sketches. This was followed by the Shostakovich-influenced Ballade, performed by Kamila Shahtakhtinski, US-Azerbaijani pianist and Professor at Northeast Florida University.

Two of the most evocative parts of the evening were provided by the glorious Chinese soprano Sabrina Özden, initially performing his setting of the Ey Gul poem by Azerbaijani poet Nizami Ganjavi, accompanied by Chamber Ensemble. She also gave voice to his setting of the Lay Lay lullaby with lyrics by Suleyman Rustam, alongside Jeffrey Werbock (kamancha) and Jelena Makarova (piano).

This was an unforgettable evening in London and perfect tribute to the peaceloving, humanitarian and creative force that was Jevdet Hajiyev.