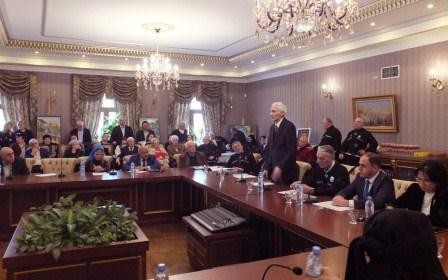 Centenary of the premiere by the great Azerbaijan composer Uzeyir Hajibeyov’s "Arshin mal alan" musical comedy was held at the Museum of Azerbaijani Culture named after M. F. Axundzade in Tbilisi.

Supported by Culture Museum and Theatre and Film University named after Shota Rustaveli, the event was attended by representatives of Azerbaijani Embassy in Georgia, Ministry of Culture and Monument Protection of this country, as well as famous opera singers, figures of theater, cinema, science, art and culture.

In her opening remarks, Museum’s director Leyla Aliyeva spoke of the history of cultural relations between Azerbaijan and Georgia, noting the role of "Arshin mal alan" musical comedy in world culture.

Addressing the audience, rector of the Shota Rustaveli Theatre and Film University, professor Giorgi Dolidze, Tbilisi Mayor David Narmania and others stressed the importance of such events in deepening of cultural relations between the two countries.

Afterwards, the Georgian opera singers in their national dress performed numerous parts of the famous operetta.