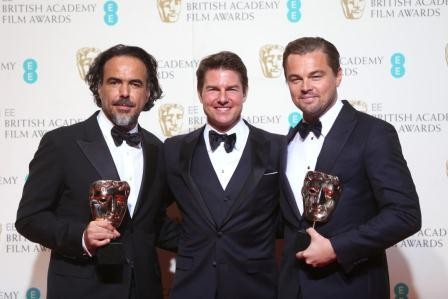 “The Revenant” was awarded five prizes, including best picture, at the British Academy Film Awards.

Leonardo DiCaprio cemented his Oscar-favorite status by taking the best-actor trophy for playing a bear-battling fur trapper in a brutally wild American West. “The Revenant” filmmaker Alejandro G. Inarritu was named best director for what he called a “human and tender story.”

DiCaprio, who has been nominated three times before at the British awards without winning, said he was “absolutely humbled” to beat fellow finalists Matt Damon, Bryan Cranston, Michael Fassbender and Eddie Redmayne.

The British awards, known as BAFTAs, are considered a portent of success at Hollywood’s Feb. 28 Academy Awards. “The Revenant” has earned DiCaprio his sixth Oscar nomination — and, many believe, his best shot at finally winning.

The best-actress trophy went to Brie Larson as a mother trying to shield her son from a terrible reality in “Room.”

Irish emigrant saga “Brooklyn” was named best British film, a distinct category, while the documentary prize went to “Amy,” a powerful portrait of the rise and fall of singer Amy Winehouse.