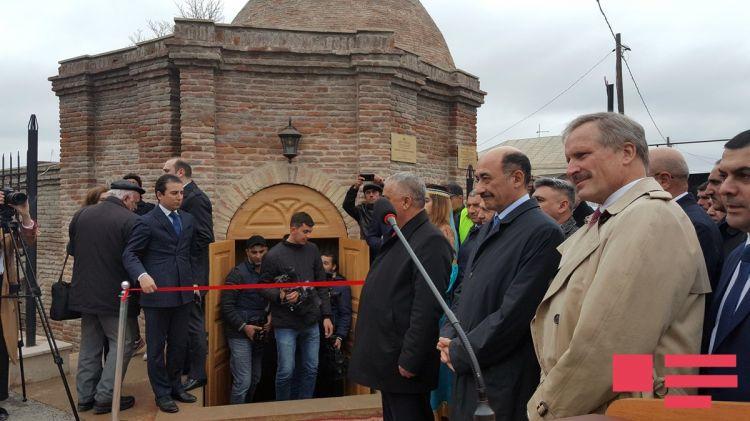 Gumbezli bath house, which was restored with the support of US Embassy in Azerbaijan, was opened in Guba.

Axar.az reports citing APA that the bath house was restored with the financial support of the U. S. Ambassadors Fund for Cultural Preservation and cooperation with Ministry of Culture and Tourism.

Head of Guba Executive Power Ziyaddin Aliyev said that Guba has had cultural and multicultural roots. According to him, such monuments are restored for future generation.

Minister of Culture and Tourism Abulfas Garayev said that all historical monuments in Azerbaijan are preserved: ‘These monuments are wealth, attributes which express our roots. Azerbaijan has always been loyal to multicultural traditions. Involvement of foreign country’s power to restoration of this monument in Guba should be accepted as a respect to environment in this district’.

US ambassador to Azerbaijan Robert Cekuta said that the ambassadors should strengthen not only the relations among countries, but also the relations among peoples: ‘One of the most beautiful ties is established via culture. History brings together all of us. Evil forces try to separate peoples from one another. Tolerance in Azerbaijan is an example for several counties. The project has started since March 2014. After restoration, it will be put into use as a place to support local economic development. Restoration of bath house will be a symbol of friendship between our countries’.

Then, the bath house was opened. It was built in the 19th century and operated till 1980s.