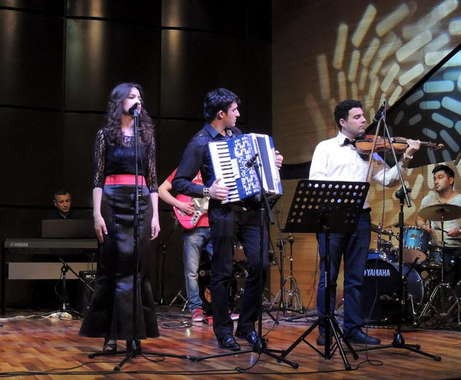 The International Jazz Day was celebrated worldwide on April 30 bringing together internationally acclaimed Jazz musicians from all part of the Earth.

The UNESCO organized annual event featured the historical, cultural, and educational contribution of this popular genre of music. The day aims to spread international awareness about this unique musical style and to promote the cultural, and social values that Jazz stands for.

The grandiose music event was marked in Azerbaijan in an original way this year. as Traditional International Jazz Festival kicked off at the Mugham Center in Baku on April, 30.

An outstanding live concert was organized by the Azerbaijan State Culture and Art University with the assistance of the International mugham center in Baku.

The event was attended by all jazz lovers, teachers and students of the university as well as the families of performers who came to support them.

The concert began with the performance of the State Culture and Art University jazz orchestra. The musicians often perform at various events, but that was the first ever jazz concert on the scene of Mugham center. Since the very first minute, the orchestra charged the audience with positive energy, which did not leave them until the end of the concert.

Musicians included professionals and young performers that not only sang, but also played on various musical instruments: violin, clarinet, accordion, saxophone and others. The concert featured popular songs such as "Autumnleaves", "Woman and man", "Sway", "Tango", "A day in the life of a fool" and many other popular compositions.

The audience applauded mostly the performance of Azerbaijani musicians, who performed national songs in a completely new manner.

Young jazz musicians gave the audience an unforgettable evening. Each performance was accompanied by a warm support of the audience.

Great attention given to the young singers was the undeniable proof of their success on stage in Baku.

Azerbaijani jazz is a unique music, combining classical and Azerbaijani folklore genre and hardly any other national jazz scene has such a range of styles, traditions and techniques.

The oil boom, starting in the 19th century in Baku, turned the City of Winds into the economic and cultural center, making significant influence to the development of the impressive music, originated from African American communities, in the country.

Despite jazz was prohibited by the Soviet government to avoid the anti-Western propaganda, true lovers of jazz were continuing to listen to Western radio and energize music-lovers with favorite melodies at private concerts.

The revival of jazz in the Land of Fire started in 1960s, thanks to the active efforts of great national composers such as Gara Garayev, Tofig Guliyev, Rauf Hajiyev and Niyazi.

The love for vocal singing and jazz brought together four young talents including Teymur Mirzayev, Arif Hajiyev, Rauf Babayev and Lev Elisvetskiy in 1961 to create famous national quartet “Gaya”, whose records were popular in more than 40 countries around the world including the Soviet Union, Europe, America and Africa.

The “flowering” of Azerbaijani jazz is associated with the names of giants such as Rafig Babayev and Vagif Mustafazade, who experimented creating unrepeatable compositions, becoming the founders of a new jazz trend - jazz-mugham. This unique genre assembles both a traditional Azerbaijan music and a classic American jazz.

The two talented musicians stole the public’s heart, performing at the same stage with legends such as Charles Lloyd, Jack DeJohnette at the Jazz Festival in Tallinn, Estonia. There American jazz trumpeter called Mustafazade creator of the music of future.

The outstanding pianist Mustafazade, who composed fugues, preludes, ballads and scherzos became the world's best of the best musicians in 1979.

The genius’s “Waiting for Aziza” composition sent to the World Contest of Jazz Music in Monaco won "White piano" prize, considering a symbol of pure music, bearing peace and love for life well-suited to the music of Mustafazadeh.

The daughter of the eminent musician, world jazz icon and charming Aziza Mustafazadeh inherited her talent from musical parents.

While still a girl of seventeen, Aziza won the first place in the pianists competition of the Thelonious Monk in Washington in 1986, impressing the jury by mixing music of prominent jazz pianist Monk with elements of mugham.

Since 1990 she has been living in Mainz, Germany where everyone knows her as “Eastern Diva”, “Scheherazade at the piano” and “Jazz princess”.

History of Azerbaijani jazz is very rich and illustrious and it continues to grow until now, thanks to talented musicians and composers such as Rain Sultanov, Jamil Amirov, Salman Gambarov, as well as young genius conquering worldwide fame Isfar Sarabski, Nurlan Novrasli, Emil Afrasiab, Elchin Shirinov and more.

Since 2002 the Caspian Jazz international festival has held in Baku every year, attracting many famous foreign musicians to the City of Winds.