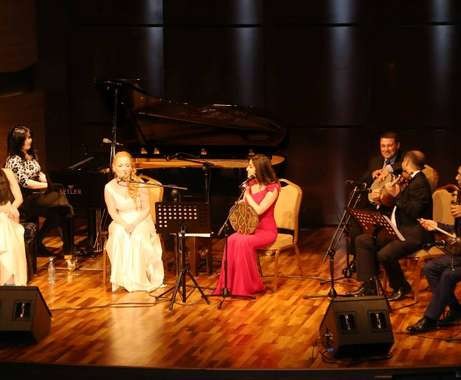 The International Mugham Center in Baku hosted "Sound Waves" folk festival on May, 6.

The long-awaited musical event, co-organized by Azerbaijan's Ministry of Culture and Tourism and the International Mugam Center with the contribution of Centro Italiano Baku and the Embassy of Greece in Azerbaijan, brought together prominent public, culture and art figures as well as representatives of diplomatic missions.

Various publications about the culture and history of Greece Heritage and other information booklets and brochures were presented to the guests.

In his speech, the ambassador of Greece to the country, Dimitrios Tsoungas expressed his gratitude to organizers of the event.

The tandem of Azerbaijani and Greek was imaginative and intensely musical, which gave the concert a special aura.

The great enthusiasm of the audience, who stood up and applauded the talent of Azerbaijani and Greek singers, is a clear evidence that music is a global code which promotes brotherhood and cooperation among peoples.