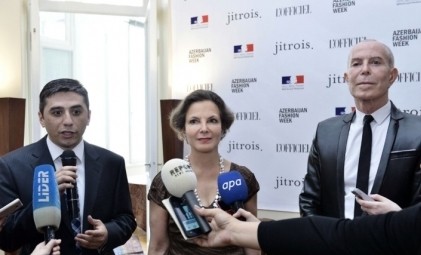 The meeting occurred within “Azerbaijan Fashion Week” co-organized by the French Embassy and the Ministry of Culture and Tourism of Azerbaijan.

Ambassador of France to Azerbaijan Aurelia Bouchez stressed the importance of the event. “France, as you know, is one of the most major countries in the fashion industry. About thousand fashion companies are operating in France. This means 165,000 work places. France every year exports lux suites in the amount of 7 billion EUR.

Then, Jean-Claude Jitrois delivered a speech and said the culture is a common value of France and Azerbaijan.

He said he also met with the Azerbaijani designers. “Fashion is a way of self-expression. I invite all of you to the presentation of my collection tomorrow evening,” he said.

The designer presented the first part of his collection.