A parade of pharaohs was held in Egypt - Video 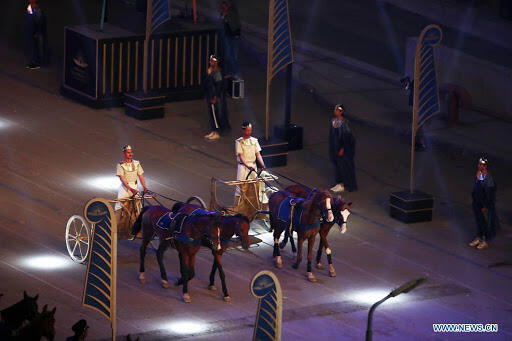 In Egypt, the mummies of 22 pharaohs were transported in a special parade.

Axar.az reports that the mummies of 22 pharaohs, including Ramses II, were transported from the Cairo Museum to the exhibition center of the Egyptian National Museum of Civilization in Fustat in an ancient Egyptian-style caravan during the so-called "Golden Journey" parade.

According to the greatness of the ancient rulers, the parade began with 21 artillery shells. The parade along Tahrir Square along the Nile River was greeted by Egyptian President Abdel Fattah Sisi. Then the parade moved to the Egyptian National Museum of Civilization.

The mummies were accompanied by 60 motorcycles, 150 horses and a music ensemble led by renowned Egyptian maestro Nadir Abbas.

The 40-minute event, attended by 12 senior Egyptian officials, was broadcast by more than 200 television channels from around the world.

Ahmed Ghanim, chairman of the board of the Egyptian National Museum of Civilization, said it was the first parade in Egyptian history to bring together kings.

According to the Egyptian Ministry of Tourism, the mummies were found in two groups in southern Egypt in 1871 and 1898.