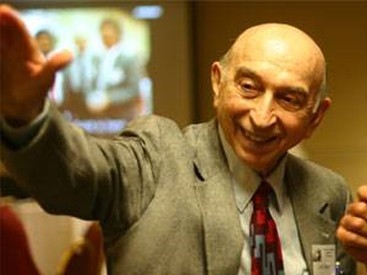 Today, the Azerbaijani scientist, the founder of the field of artificial intelligence and fuzzy logic theory, Professor of the University of California, Berkeley Lotfi Zadeh's 95th anniversary.

Lotfi Zadeh was born in Baku on 4 February in 1921.He entered Electrical engineering faculty of Tehran University . Since 1944, the great scholar of American life. After graduating from the University of Tehran, the United States was a great success and continued his studies at the Massachusetts Institute of Technology.

Lotfi Zadeh is a member of the Academy of many foreign countries.

Lotfi Zadeh's theories of are important for the world .They are widely used in science and industry. The theory of fuzzy logic scientist gained world fame.

Lotfi Zadeh fuzzy logic theory in 1989, scientists in Japan, the highest award for achievements in the industry - "Honda" was honored with the award.

Lotfi Zadeh, June 19-20, 2013 in Madrid, Spain, BBVA Foundation, which was founded in the field of science and culture, the ceremony of awarding the prize was awarded in the amount of 400 thousand euros.