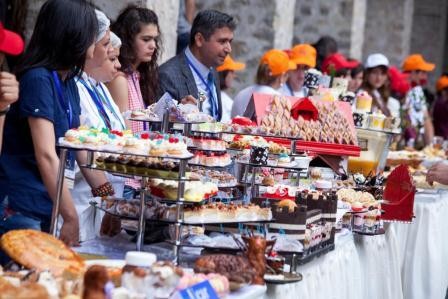 Azerbaijan’s ancient city of Sheki will host the third International Festival of National Sweets thus expanding the list of traditional and colorful festivals taking place in the country.

Sweets are an inseparable part of the national cuisine, that’s why the festival will bring together cooks from all over Azerbaijani regions and not only.

This year the festival is expected to have new guests from Ghana, Russia, India, Romania, Turkey, Korea and Greece. Co-sponsors of this year’s aromatic festival are the Sheki City Executive Authority and the Azerbaijan National Culinary Association.

The participants will display their dishes according to national and regional custom. The treats will be placed in special pavilions equipped alongside decorative household items and rugs, relating to the region in which they are produced.

In the inaugural Sheki festival, which took place in 2014 the culinary specialists from Turkey, Korea, Kyrgyzstan, Mongolia, Georgia, Turkmenistan, Kazakhstan, Romania and Russia struggled to be the best.

Last year the event expanded the geography of participants, and saw pastry chefs from 11 countries including Turkey, Kazakhstan, Kyrgyzstan, the Turkish Republic of Northern Cyprus, Romania, Indonesia, Korea, France, Russia, Moldova, and Serbia along with confectioners from 21 regions of Azerbaijan.

The number of participants was about 500 people in the previous years. Representatives of Romania, Kazakhstan, and France were awarded top prizes at the festival. Second place was taken by pastry chefs from Serbia and Russia, while third place went to confectioners from Moldova, Kyrgyzstan, and the Turkish Republic of Northern Cyprus.

Sheki is one of the most fascinating ancient cities of Azerbaijan, famous for its own sweet pakhlava, which is made of rice flour, nuts, and sugar-honey syrup. Anyone visiting Sheki will not be able to resist the temptation of its famous Pakhlava.

There are more than 30 varieties of Azerbaijani pastries using ingredients such as poppy seeds, walnuts, almonds, sesame seeds, ginger, and cardamom, which make treats spicy and especially tasty.

Every region of Azerbaijan has its own special recipe for local sweets, which may even have different shapes depending on the traditions of the region.

Pakhlava, shekerbura and badambura- adornments of the Novruz holiday- are among the most famous Azerbaijani sweets.