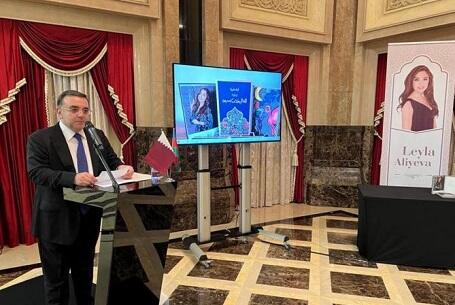 A ceremony for the presentation of the Arabic version of a book of poems by noted Azerbaijani poet, painter and writer Leyla Aliyeva, was held on Sunday at Katara – the Cultural Village in co-operation with the Azerbaijan embassy.

Axar.az reports that her book – "The World Dissolves, like a Dream" – was previously published in Azerbaijani, English, Persian, Russian, and Uzbek languages.

Ismayilov said that the Arabic version of "The World Dissolves, like a Dream" was being presented for the first time in Qatar.

In her address, Efendiyeva stressed that "the ties between the Turkish world and the Arab world are based on the ancient past”.

“First, the factor that unites us is our common religious values,” she said. “In addition, since the Middle Ages, the spread of the Arabic language in the East created cultural and spiritual closeness between the Arab and Turkish peoples." The daughter of Azerbaijan President Ilham Aliyev, Aliyeva has penned other poems, such as "Butterfly", "Each has an end", and "My eye is blind."

Born in Moscow on July 3, 1984, she is also an Azerbaijani public figure holding various positions.

Aliyeva is the head of the Russian representative office of the Heydar Aliyev Foundation, the founder and editor-in-chief of "Baku" magazine since 2007, the vice-president of the Heydar Aliyev Foundation since 2011, the chief co-ordinator of the intercultural dialogue of the Organisation of Islamic Co-operation Youth Forum, the chairperson of the Azerbaijani Youth Organisation in Russia, a member of the Board of Trustees of the Baku International Centre for Multiculturalism, and the founder and chairperson of the international dialogue public association for environmental protection.

She is also a painter: her artworks have been exhibited in Paris, Berlin, London, and Moscow.

Her poem "Elegy", dedicated to her grandfather Heydar Aliyev, was included in the Grade 5 textbooks of secondary schools in Azerbaijan.

Her collection of poems "As if you were a flame" is one of the selected publications of Azerbaijani literature presented to readers by the prestigious BENGÜ publication brand of Turkiye.

Examples of the paintings by Aliyeva are reflected in the design of the book "The World Dissolves, like a Dream".

The event yesterday also saw the screening of a short documentary dedicated to the life and creativity of Aliyeva.