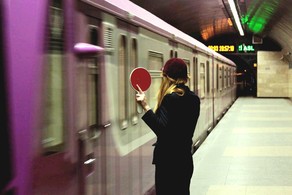 Baku Metro has applied one more innovation. From this day, entrance and exit of 'Memar Ajami' metro station changed.

It was told by Spokesperson of 'Baku Metro' CJSC Nasimi Pashayev.

Notably, two stations of new 'Violet line' - 'Avtovaghzal' and 'Memar Ajami-2' of Baku Metro will be launched at the same time - in the first half of 2016.