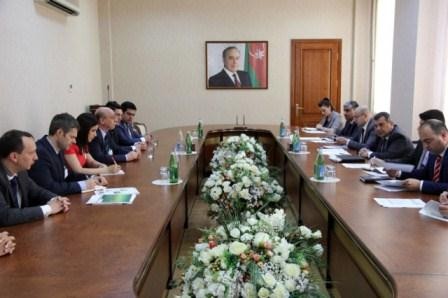 Azerbaijan`s Deputy Minister of Agriculture Ilham Guliyev met the delegation led by economic councilor of the Embassy of France, Mr. Herve Sarnelli, on May 12.

According to the press service of the Ministry of Agriculture, the meeting participants discussed cooperation in agricultural sector, as well as the issues on the participation of French companies in economic reforms carried out in Azerbaijan.

Ilham Guliyev informed the guests about reforms carried out in agrarian sector in recent years, the attention and care of the President of Azerbaijan to this sphere, relevant decisions and orders, as well as subsidies for agricultural producers, emphasizing favorable investment climate in Azerbaijan in the field of agriculture.

Highlighting that Azerbaijani agriculture is equipped with Europe's most modern technology, Deputy Minister I. Guliyev stressed that, the president of the country attaches special importance to the development of cotton, silk, tobacco and tea growing.

Herve Sarnelli said he would spare no effort for further development of relations in the agricultural sector, as in other sectors of the economy.