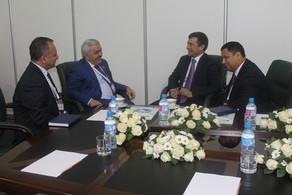 It was told in the SOCAR, SOCAR joined the anniversary exhibition, which gathered more than 200 companies from 26 countries.

Rovnag Abdullayev held a series of meetings within the framework of the conference. During the meeting with Bulgarian Prime Minister Boyko Borisov, SOCAR President said he arrived in Tashkent from Thessaloniki where he attended the Trans-Adriatic Pipeline (TAP) groundbreaking ceremony, the important event toward the implementation of Southern Gas Corridor project.

The development of bilateral relations between Azerbaijan and Uzbekistan, the prospects of energy cooperation, the possibilities for cooperation between SOCAR and “Uzbekneftegaz” were in the focus of attention during the meetings with Gulomjon Ibrahimov, Deputy Prime Minister of Uzbekistan and Alisher Sultanov, Chairman, Board of Management, “Uzbekneftegaz” National Holding Company.

SOCAR and “Uzbekneftegaz” signed the Memorandum of Understanding (MoU) on exploration and development of oil and gas fields and other issues of energy cooperation.