"The most original postage stamp of the month" 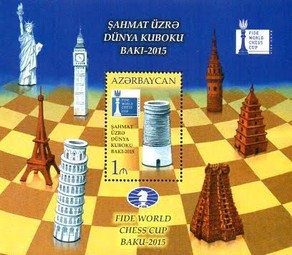 A postage stamp issued by Azermarka LLC of the Ministry of Communications and High Technologies (MCHT) on the occasion of “FIDE World Chess Cup. Baku-2015” has been selected as “The most original postage stamp of the month” in Italy. It was told in the ministry.

This is stated in a message of MCHT whereby it is noted that the winner was determined as a result of voting held by network users on “Facebook” page of the magazine "UNIFICATO".

The main criteria of the competition “April 2011 - April 2016: five years with the publication of art”, conducted by magazine’s staff on a social network, was determination of the best quality and original postage stamp.

The results of the voting were first posted on the Facebook page of the magazine.

Note that, along with the “UNIFICATO” page, the full text of the article on the selection of the postage stamp as “the most original postage stamp of the month” dedicated to the competition FIDE World Chess Cup held in Baku on 10 September - 5 October 2015, was posted in the April issue of the magazine (l'arte del francobollo 57 Aprile 2016).

The article says the postage stamp depicts the perfect image of the planet, as well as other historical monuments of the world - Tower of Pisa (Italy), Eiffel Tower (France), Big Ben (London), The Kremlin Tower (Russia), Ranganatha Temple (India), Statue of Liberty (USA) around Maiden Tower which is situated in Old Baku, host of the FIDE World Chess Cup.