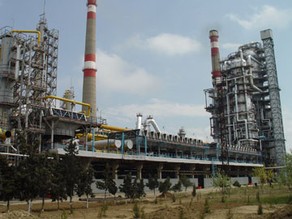 Event has been held at Heydar Aliyev Baku Oil Refinery (BOR) regarding results of next audit, which was held by the employees of the Turkish Standards Institute due to application of TSЕ-ISО-ЕN 9001, TSЕ-ISО-ЕN 14001 and TSЕ-ISG ОHSАS TS18001 standards.

According the press service of the State Oil Company of Azerbaijan Republic (SOCAR), Head of the Representative Office of the Turkish Standards Institute in Azerbaijan Selim Celebi said during 5 days audit team has controlled complying with requirements of the standards in the structural departments of the plant - separate production areas, TEK service and in the medical station.

Chief Engineer of H.Aliyev BOR Nаil Amirоv expressed his gratitude to the audit team as well as confidence in continuation of cooperation in this field in future.

In the end, according to tradition, auditors of the Turkish Standards Institute planted commemorative trees in the park in front of the plant.