Export of Azerbaijani oil up by 17% 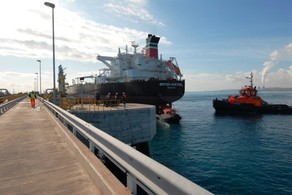 2.8 mln tons of Azerbaijani oil exported from Ceyhan port (Mediterranean Sea, Turkey) on the world market in July, 2016, which is more by 17% on an annualized basis.

In January-July this year, 17.5 tons of crude oil were exported from Ceyhan port. This is 3% higher than exports in the first half of last year.

In general, from the moment of putting into operation of the BTC pipeline (2006) until August 1, 2016 from the port 308.7 mln tons of Azerbaijani oil exported from the port of Ceyhan.

Notably, Azerbaijani oil is delivered to the Turkish port of Ceyhan via the Baku-Tbilisi-Ceyhan (BTC) and across the Mediterranean to the European markets. The BTC pipeline starts from Sangachal terminal, near Baku.The daily capacity of the pipeline is 1.2 mln barrels of oil.