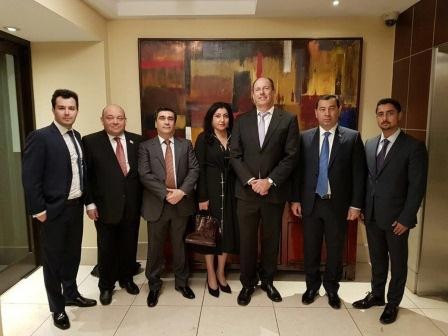 A delegation of the Azerbaijani parliament, led by the chairman of the parliament’s Foreign and Inter-Parliamentary Relations Committee Samad Seyidov and head of the Australia-Azerbaijan Friendship Group Khanlar Fatiyev, held meetings at the Australian parliament and government.

During a meeting with Australia’s Minister of Industry, Innovation and Science Greg Hunt, Samad Seyidov spoke about the political and economic achievements of Azerbaijan under the leadership of President Ilham Aliyev, the current state of the settlement of the Armenia-Azerbaijan Nagorno-Karabakh conflict, Azerbaijan’s leading role in the region and the prospects of development.

Seyidov emphasized that a new format of cooperation between Azerbaijan, Iran and Russia was created and a summit of the three countries’ leaders was held Aug. 8 in Baku.

He noted that Azerbaijan is the initiator of this format. In particular, this cooperation envisages the development of the International North-South Transportation Corridor (INSTC), which will be created by the three countries and will ensure their security and economic interests. Thus, Azerbaijan is becoming a transportation hub, through which the ways from the West to the East and from the North to the South are passing, added Seyidov.

Greg Hunt said he is aware of Azerbaijan’s important role in the region, in particular, as the initiator of major infrastructure projects, including the Baku-Tbilisi-Kars railway. He noted that Australia is interested in the use of transportation routes passing through Azerbaijan to deliver its cargos. The Australian side expressed particular interest in connection to the Great Silk Road project, in which the leading role belongs to Azerbaijan.

The officials also discussed the opportunities in the course of establishment of bilateral industrial relations between the two countries.

The economic development and innovation in Australasia and Oceania are of special interest to Azerbaijan, especially in the times of the economic diversification. Azerbaijani officials highlighted the unique geographical location of Azerbaijan that can create substantial benefits to Australia and even help Australia access the benefits of trade on the Great Silk Road, in which Azerbaijan is already a focal point.

The government officials and parliamentarians agreed to continue close cooperation and defined the course of actions toward realization of this initiative.