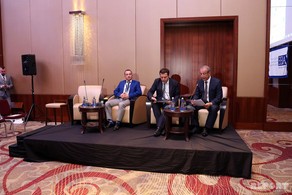 Official Baku does not rule out transportation of Iraq's and Iranian gas through the territory of Azerbaijan then by joining TANAP exporting to Europe. Azerbaijan's Deputy Minister of Energy Natig Abbasov said.

"Azerbaijan is one of the main initiators of the TANAP.

Transportation of Iranian gas through the territory of Azerbaijan joining TANAP in Turkey, from there to Europe is considered ", - Deputy Minister noted.