EU’s TTIP trade deal with the US has collapsed 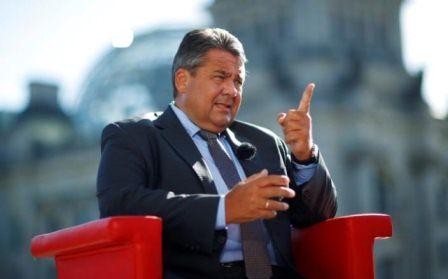 The European Union’s long-planned trade deal with the US has collapsed with negotiations showing no sign of progress despite three years’ of talks, according to Germany’s economy minister.

Sigmar Gabriel, also Germany’s vice-chancellor, claimed this weekend that disagreements between the EU and the US, and between countries within the EU, appear to have “de facto” killed off any prospect of a deal to create the Transatlantic Trade and Investment Partnership (TTIP), which would be the largest bi-lateral free trade agreement ever.

TTIP was envisaged as a wide-ranging free trade deal between the two enormous economic blocs, which European officials estimated would boost the EU’s GDP by €120bn, or 0.5pc.

“In my opinion, the negotiations with the United States have de facto failed, even though nobody is really admitting it,” Mr Gabriel said.

“The talks with the US have de facto failed because we Europeans of course must not succumb to American demands. Nothing is moving forward.”

The head of the centre-Left Social Democratic Party told public broadcaster ZDF that negotiators had failed to agree on a single item out of the 27 chapters of the treaty.

His words clash with those of Chancellor Angela Merkel who hasdescribed the deal as “absolutely in the EU’s interests.”

Negotiators from the EU and the US have been working on the deal for three years and had hoped to reach a conclusion by the end of 2016.

Britain was a major advocate of the deal but has now voted to leave the EU.

France’s President Francois Hollande has objected to plans to open up Europe’s farming and film markets to more US competition, while protesters in Germany have claimed the deal would undermine labour and environmental standards.

In the US, presidential hopeful Donald Trump has repeatedly spoken out against free trade, including the long-established North American Free Trade Agreement, which opened up trade with Canada and Mexico in the 1990s.

He also criticised the Transpacific Partnership (TPP), a mooted deal to cut barriers to trade with east Asian nations, and called trade arrangements with China “a rape of our country.”

His Democratic rival Hillary Clinton has also rowed back on her previous enthusiasm for free trade deals, promising to pull out of TPP as it currently stands.

The collapse of the TTIP negotiations will also have implications for Britain’s future outside the EU.

Brexit is expected to leave the country free to negotiate its own trade deals with countries elsewhere in the world.

Critics fear that the newly independent UK will struggle to carve out new agreements alone if it lacks the clout of the EU negotiating as a bloc.

But the failure of TTIP may strengthen the Brexiteers’ argument that Britain will be more nimble on its own, as the UK will not have to co-ordinate 27 EU countries’ individual desires into one combined EU effort.