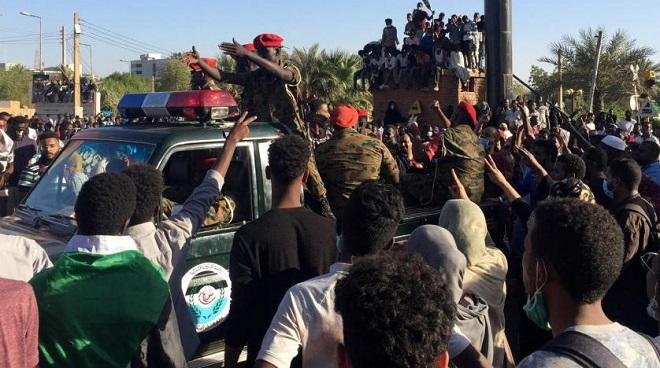 The transitional military council of Sudan has arrested or sacked senior members of the government of the ousted leader Omar al-Bashir, a spokesman said.

The defense minister, Awad Ibn Auf, was removed from his role on Sunday, a few days after his resignation from heading the military council.

Sudan’s ambassadors to Washington and Geneva have also been dismissed, the spokesman said.

The purges followed continuing talks between the new military rulers and protest organizers who demand a civilian government.

Thousands of protesters remained encamped outside Khartoum's army headquarters to keep up pressure on a military council that took power after ousting Bashir on Thursday.

The protesters on Sunday demanded the country's military rulers "immediately" hand power over to a civilian government that should then bring al-Bashir to justice.

"The ministry of foreign affairs is looking forward to the international community to understand the situation and to support the transitional military council... in order to achieve the Sudanese goal of democratic transition," the ministry said in a statement.

The military seized power from al-Bashir in a coup following months of mass protests across the country.

The protests against Bashir initially erupted on December 19, 2018, in the face of a government decision to triple the price of bread. The demonstrations quickly turned into a mass movement across the country against the president, and finally led to his ouster on Thursday.

Bashir, 75, who ruled over 30 years, took power in a coup in 1989. He had said that he would only move aside for another army officer or at the ballot box.